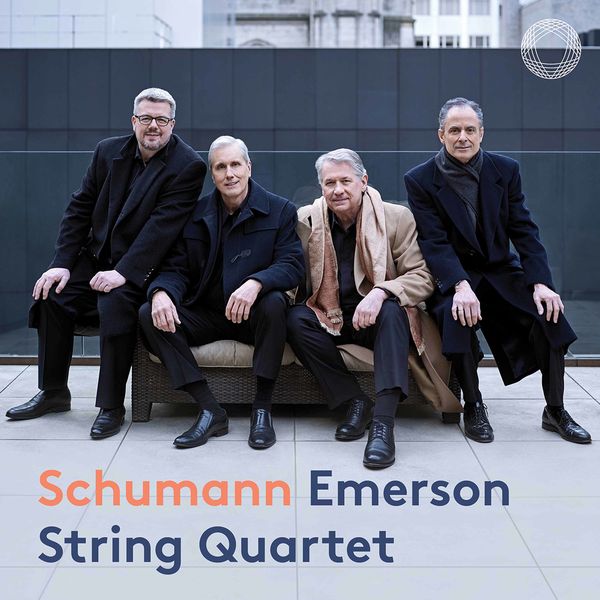 The Emerson String Quartet makes its PENTATONE debut with a recording of Schumann’s three string quartets. Penned in the summer of 1842 during an exceptional peak of creativity, these quartets formed the beginning of a six-month surge during which most of Schumann’s best chamber music saw the light. Inspired by the example of Beethoven, Schumann’s quartets display a mastery of traditional forms, combined with typically Schumannian fantasy and lyricism, particularly in the inner movements. As such, they underline a new level of maturity in Schumann’s artistic development, surpassing the fantastical aesthetic of previous years. The players of the Emerson String Quartet bring out the extraordinary freshness and originality of these works, and add another master composer’s oeuvre to their impressive discography, after having recorded the complete string quartets of Beethoven, Mendelssohn, Brahms, Bartók, Webern and Shostakovich. The artistic strength of Schumann, whose life was dominated by alternating periods of depression and manic creativity, inspires and consoles the quartet members during the uncertain times of a pandemic, and his music may equally inspire listeners. Since its founding in 1976, the Emerson String Quartet is ranked among the world’s most acclaimed chamber music ensembles.

The great veterans of the Emerson String Quartet offer here Robert Schumann’s Quatuors, recorded on three dates and in two different locations. These three Quatuors are rather unique in the sense that they were composed in the same year and over an astonishingly short period of time, over June and July 1842.

Perhaps this creative gesture can be seen as Schumann’s response to his admiration for Quatuors Op.44 by his friend Felix Mendelssohn, to whom this entire work was dedicated. According to French quartet specialist, Bernard Fournier, Schumann wanted to impress his soon-to-be wife, a pianist famous throughout Europe, while he was only known locally as a music critic rather than a composer.

These three quartets, conceived as a whole and written in a rather bright style that is quite rare for Schumann, are rigorously interpreted by the Emersons as they make their debut with the label Pentatone. The American quartet musicians who are highly regarded for their precision, opt for an extreme liveliness that highlights the originality in these works, but to the detriment of an expression that lacks a little warmth. – François Hudry