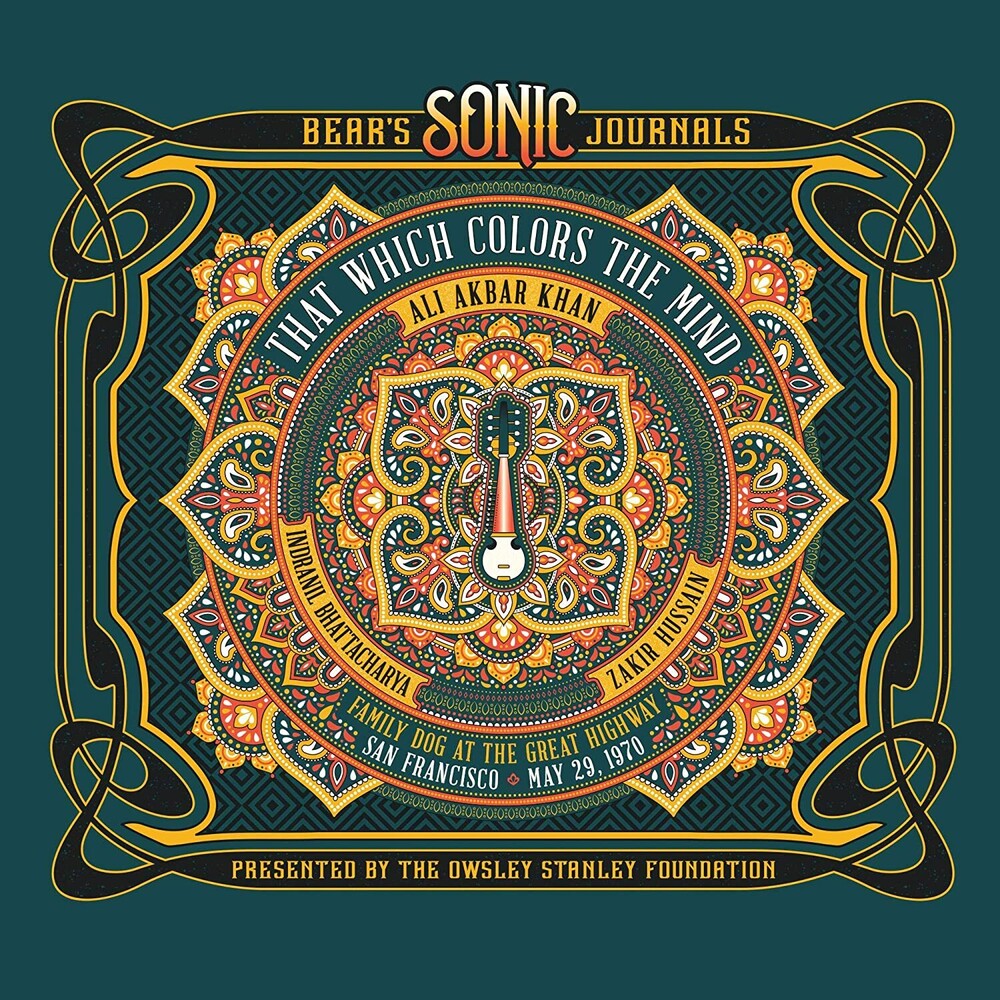 The Owsley Stanley Foundation, in partnership with the Ali Akbar College of Music in San Rafael, CA, is pleased to announce the sixth release from Owsley’s storied archive of live concert recordings – Bear’s Sonic Journals: That Which Colors the Mind, a previously unreleased 1970 live concert featuring one of the greatest masters of Indian classical music, Ali Akbar Khan (sarod), accompanied by Indranil Bhattacharya (sitar) and Zakir Hussain (tabla).

The combination of Stanley, the eccentric genius of concert sound and live recording as well as psychedelics, and Khansahib, the greatest sarod master of the 20th century, is simply remarkable. Along with Ravi Shankar and his tabla player Allarakha (Zakir Hussain’s father), Khan was a central player in bringing the music of India to audiences around the world. That this recording would originate from San Francisco’s counter-cultural beacon, the Family Dog on the Great Highway, at the very furthest edge of Western civilization, makes it even more iconic.

Ali Akbar Khan was the court musician of the Maharaja of Jodphur, a MacArthur “Genius Grant” recipient, and has been called “the Bach of India” (Washington Post) and “perhaps the greatest musician in the world” (Yehudi Menuhin). He was identified as a key influence by the Beatles, Grateful Dead, Rolling Stones, and Santana.

This release is one of the most evocative recordings of Ali Akbar Khan from the era, as Owsley’s tapes have an uncanny ability to transport the listener to the room that night. Owsley’s tapes have long been considered some of the highest quality live concert recordings of his era. This is the sixth chapter of Bear’s Sonic Journals. Previous titles featured Doc Watson, the Allman Brothers, Jorma Kaukonen & Jack Casady (Hot Tuna), New Riders of the Purple Sage, and Commander Cody & His Lost Planet Airmen.

This album features more than two hours of music from Ali Akbar Khan’s May 29, 1970 live performance at the Family Dog at the Great Highway, San Francisco, CA. The 2-CD set includes original cover art by Chris Gallen, unpublished photographs, and an extensive 28-page booklet with notes featuring new interviews from Ali Akbar Khan’s family and colleagues. The notes explore some of the surprising connections between the Grateful Dead and Ali Akbar Khan, some of Bear’s theories about the impact of Indian classical music on the human central nervous system, and the intense rigor and discipline required to play this music.

It’s been said that Bear’s tapes are like a time machine; this release starts 50 years ago and will take you back 500 years in time, to the origins of a musical tradition that was believed to have the power to heal…or even to harm if misplayed.